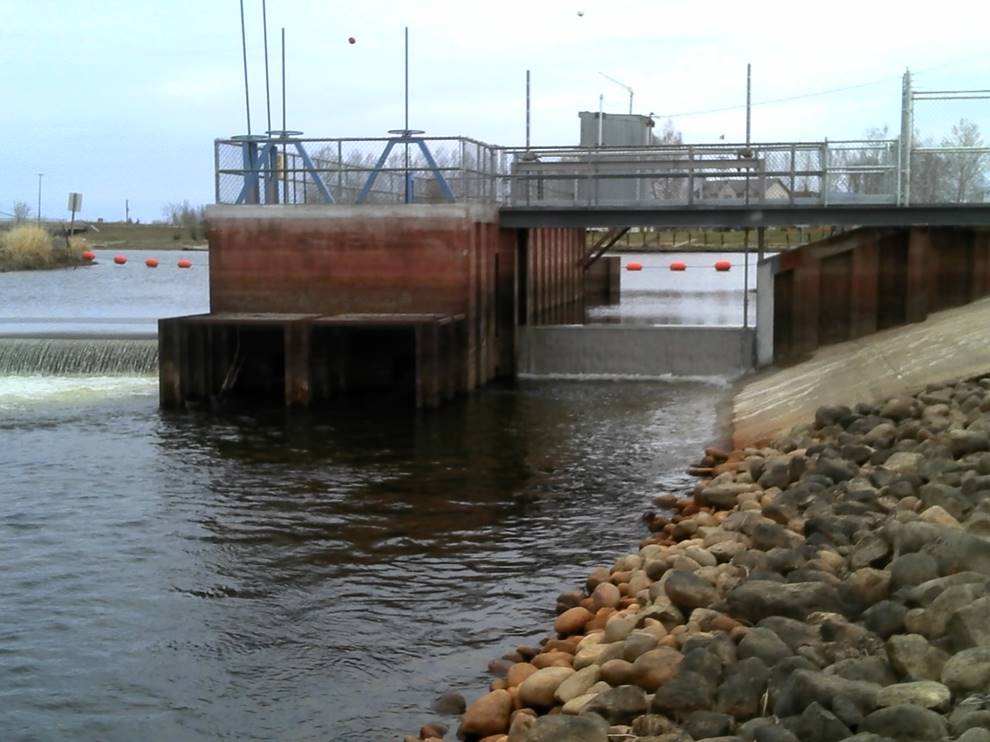 A mechanical gate was installed in the weir. When the lake level is low the gate can be opened and 6cms of flow will pass through the opening. Most of the time this gate will remain closed. It is predicted that it may be open for 1-3 weeks in march or April 1 in 4 or 5 years.

The LSWC is recommending that the in stream flow needs assessment for the Lesser slave River be completed ASAP so that we can make a science based flow recommendation through our Integrated watershed management plan. 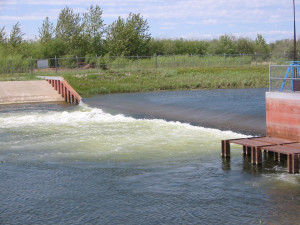 In 1983, a fixed-crest weir and eight cutoff channels were constructed in the upper reach of the Lesser Slave River. The intent of the Lesser Slave Lake Regulation Project was to reduce the severity of flooding of low-lying areas around the lake. The impact of the regulation project has been to decrease mean lake water levels by about 0.3m and to reduce the overall fluctuation of lake water levels from 3.5 m to 2.7m. Although the effect of stabilizing water levels in the lake on downstream flows in the river was not directly considered in its design, the regulation project has altered flow rates in the river from the natural condition.

In November 1999, water levels in Lesser Slave Lake dropped to 575.43m. Flow over the weir on the Lesser Slave River was intermittent and virtually ceased from November 21-24, a situation that threatened water supplies and the health of the river's aquatic environment. Emergency measures had to be implemented to restore flow to the river sufficient to supplement low flows for downstream water supplies and for dilution of effluents.

In November 2006, a combination of silt, low temperatures and resulting ice formation blocked the flow to the river at the lake outlet resulting in a blockage of flow at the weir. Once again emergency measures had to be implemented.

The issue of low water levels in the lake and river first crystallized public concerns in the winter of 1999/2000. A group of citizens and stakeholders formed a Watershed Committee to take actions on issues affecting the sustainability of Lesser Slave Lake. In 2007 this group became the Lesser Slave Watershed Council, formally designated as a Watershed Planning and Advisory Council under the provincial Water for Life Strategy.

Alberta Environment staff, with feedback from the newly formed LSWC completed the Lesser Slave River Water Management Plan in July 2009. After approval from the board of directors the WMP was submitted to Alberta Environment for review and approval. As part of the approval process, Alberta Environment carried out crown consultation with First Nations in the watershed and evaluated each of the plans recommendations.

Based upon the monitoring and assessment of river flow and water quality during the low flow conditions of 1999-2000, and given our inadequate understanding of the impacts of low river flows on the aquatic environment, the LSWC recommends that a minimum flow of 6m3/sec be maintained in the Lesser Slave River to protect water supplies for municipal and industrial uses, including effluent dilution, and to maintain concentrations of dissolved oxygen above water quality guidelines at the mouth of the river. The LSWC recommends additional monitoring be implemented whenever river flow is less than 12m3/sec.

To ensure that a minimum flow of 6m3/sec is maintained in the Lesser Slave River, the LSWC recommends that Alberta Environment take the lead role and responsibility for implementing the operational response procedures outlined in the water management plan.

To ensure protection of the river aquatic environment in the long term, the LSWC recommends the IFN work program currently in progress be completed as outlined in the plan. Completion of the work plan will allow an IFN recommendation to be made that considers all components of the aquatic ecosystem. This would enable the LSWC to collaborate with stakeholders and the public to develop a Water Conservation Objective (WCO) for the Lesser Slave River that reflects a balance between the ecological needs of the lake and river ecosystems and the economic needs of the water users. 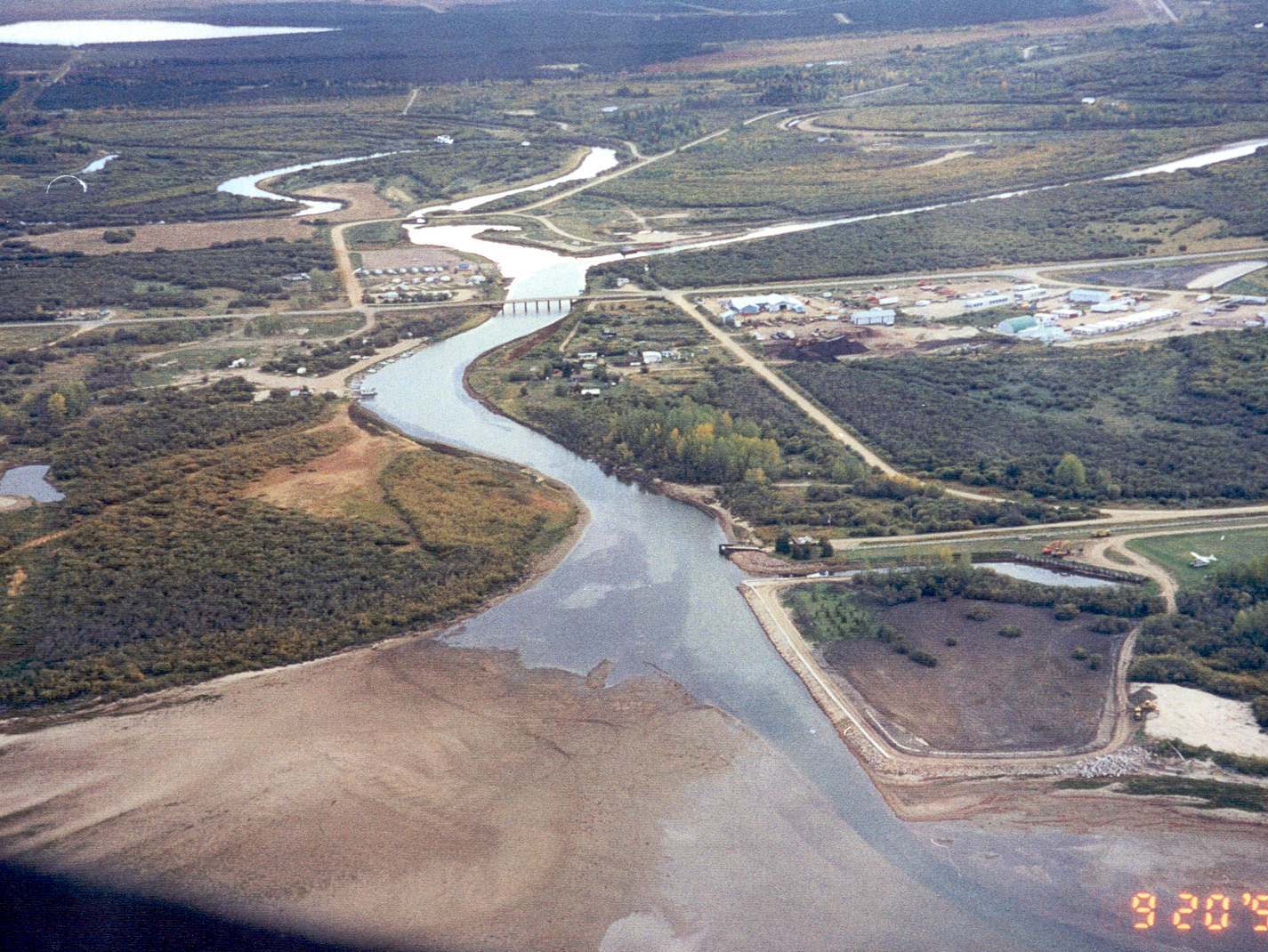 This image shows the mouth of the Lesser Slave River. Note the sediment build up and limited channel. Because of low water levels the entire channel can freeze to the lake bottom, cutting off flow in the river. 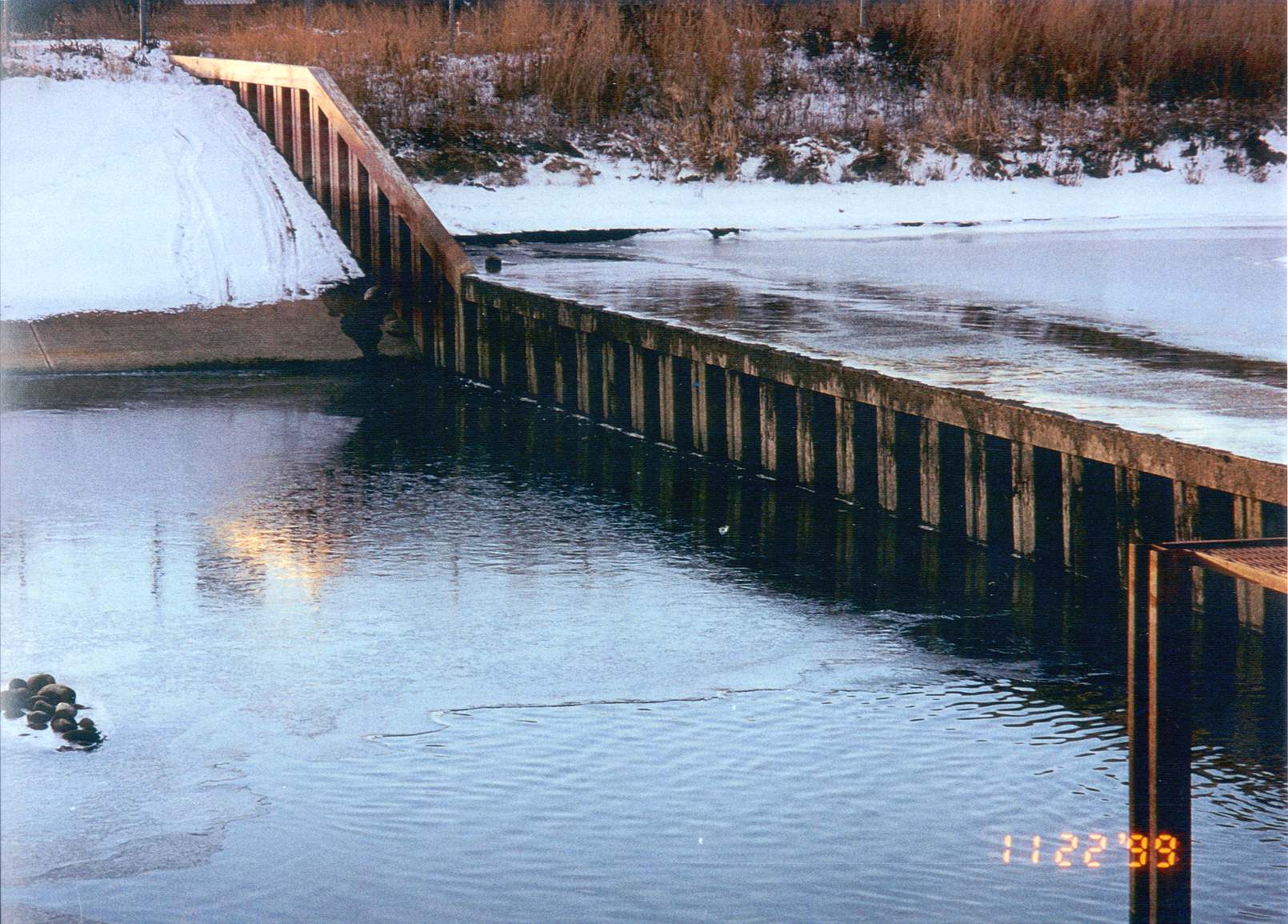 Here is the weir when water levels in the Lake drop. No water is flowing over into the Lesser Slave River which causes an immediate drop in Dissolved Oxygen. 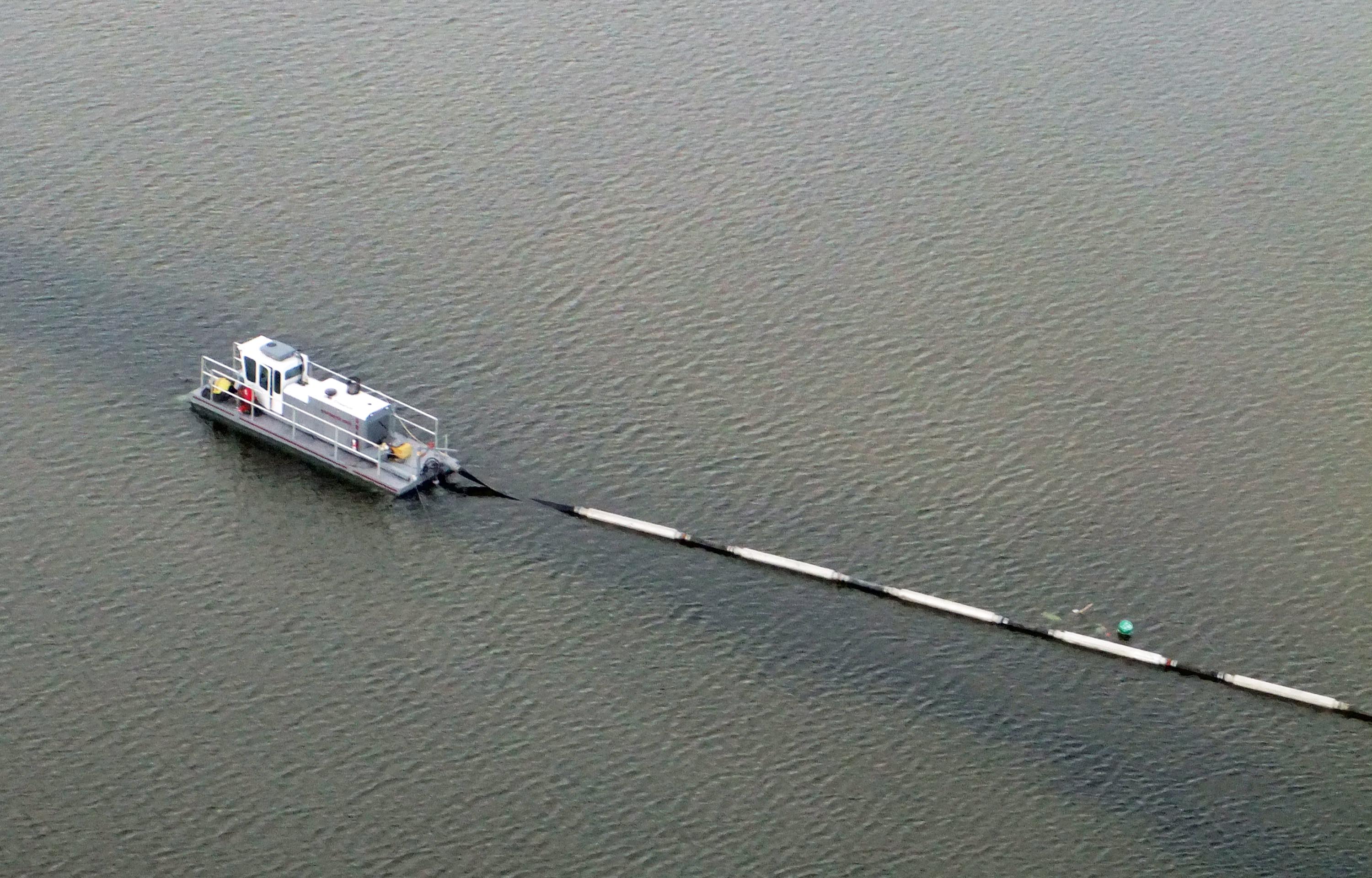 To restore flow to the weir the MD of Lesser Slave River, the Town of Slave Lake and the downstream stakeholders have had to hire a dredging barge to pump sediment out of the river channel and into self contained soil bags on the shore. In the image you can see the darker, deeper channel where the boat is travelling. 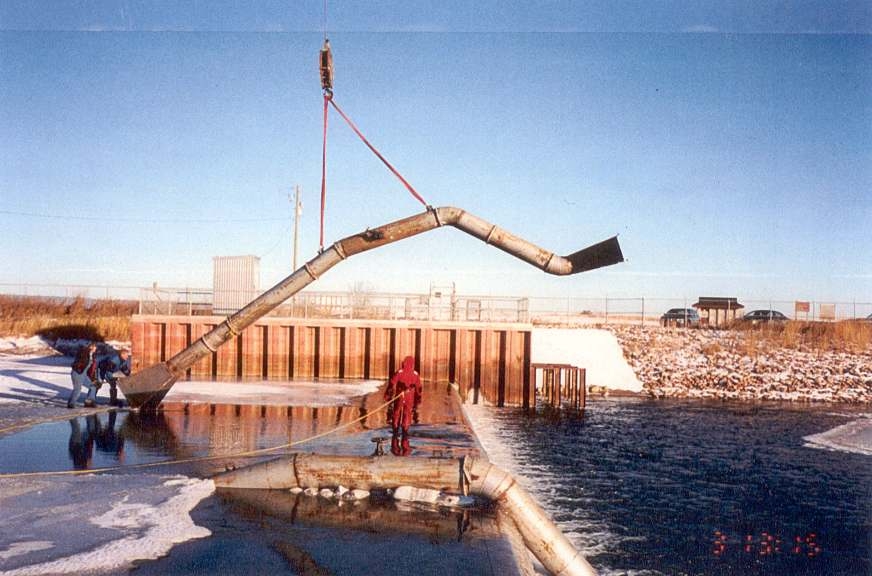 This image shows a work crew installing several custom built siphons over the weir to get some water moving downstream to maintain oxygen levels and a minimum flow.